A woman can expect to find her Isaac if she, like Rebekah, will learn to become a woman of worth; a woman more sought after than rubies by righteous men all over the earth.

It has been 3 years since Sarah died and her tent is still empty. Isaac is 40 years old and has been staying with Shem and Eber to learn the ways of Yehovah.

Yasher 24:27 And Nahor the son of Terah, brother to Abraham, died in those days in the fortieth year of the life of Isaac, and all the days of Nahor were one hundred and seventy-two years and he died and was buried in Haran.

Abraham, as the last surviving son of Terah, is the eldest member of that house now that Nahor has passed. He is sending his oldest and most trusted servant [Eliezer] and makes him “swear by Yehovah” saying, “go to my land and to my family, and take a woman for my son Isaac.” While Eliezer is gone Abraham sends to the house of Shem and Eber and commands Isaac to return to him at Beer-sheva.

Yasher 24:34 And Eliezer did as Abraham ordered him, and Eliezer swore unto Abraham his master upon this matter; and Eliezer rose up and took ten camels of the camels of his master, and ten men from his master’s servants with him, and they rose up and went to Haran, the city of Abraham and Nahor, in order to fetch a woman for Isaac the son of Abraham; and whilst they were gone Abraham sent to the house of Shem and Eber, and they brought from thence his son Isaac.
35 And Isaac came home to his father’s house to Beer-sheva, whilst Eliezer and his men came to Haran; and they stopped in the city by the watering-place, and he made his camels to kneel down by the water and they remained there.

A Prayer To Find Rebekah

This story in Genesis 24 and Yasher 24 moves me deeply every time I read it. Eliezer is leaving as Abraham’s “sent one,” his shalach. What Eliezer does, says, gives and decides is as if Abraham has done, said, given and decided it himself; he is for all practical purposes, Abraham.

The trip from Beer-sheva to Haran was 800 and I’m sure that Eliezer had plenty of time to consider how he was going to find this special woman for Isaac. What would set-apart a woman from all the others? And what kind of woman was he looking for? She had to become known to Eliezer by her actions and he formulated his prayer with these considerations in mind.

So when he arrives in Haran the first thing he does is prays to Yehovah. This is the first prayer for personal guidance in Torah; Eliezer does not pray for himself, he prays for His adon (his master) Abraham and for Isaac.

Then he said, “O Yehovah, Elohim [lawmaker and judge] of my master [adonai] Abraham, please give me success this day, and show kindness to my master Abraham. Behold, here I stand by the well of water, and the daughters of the men of the city are coming out to draw water. Now let it be that the young woman to whom I say, ‘Please let down your pitcher that I may drink,’ and she says, ‘Drink, and I will also give your camels a drink’—let her be the one You have appointed for Your servant Isaac. And by this I will know that You have shown kindness to my master.” (Gen 24:12-14)

Rebekah Appears To Eliezer Before He Finishes Praying

I always think of Rebekah as the “extra-mile girl.” She was a woman of worth who understood what it meant to serve others; she went the extra mile and watered the camels as well. Eliezer demonstrated great wisdom in his prayer, he knew the kind of woman he was looking for. Few daughters are ever taught to serve even their father, THE most important man in their life; and much more a complete stranger who is over 100 years old with all his men and camels. Rebekah reminds me of Abigail, a free woman, who when she was asked to become David’s woman said,

Our story continues with these amazing words about Rebekah,

And it happened, before he [Eliezer] had finished speaking, that behold, Rebekah, who was born to Bethuel, son of Milcah, the wife of Nahor, Abraham’s brother, came out with her pitcher on her shoulder. Now the young woman was very beautiful to behold, a virgin; no man had known her. And Rebekah went down to the well, filled her pitcher, and came up. And the servant ran to meet her and said, “ 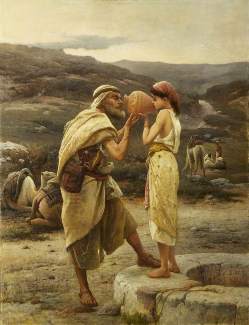 Please let me drink a little water from your pitcher.” So she said, “Drink, adonai.” Then she quickly let her pitcher down to her hand, and gave him a drink. And when she had finished giving him a drink, she said, “I will draw water for your camels also, until they have finished drinking.” (Gen 24:15-19)

Eliezer must have been stunned as this precious woman first gave him a drink and then began to provide water for all his men and camels. Had he already found the woman he had prayed for? It seemed he had, but he still had to find out if she was from Abraham’s families house; nothing less would do.

Now Eliezer asks this young woman, “Whose daughter are you? Tell me, please, is there room in your father’s house for us to lodge?” Listen to her answer and his response.

So she said to him, “I am Rebekah, the daughter of Bethuel, Milcah’s son, whom she bore to Nahor.” Moreover she said to him, “We have both straw and feed enough, and room to lodge.” Then the man bowed down his head and worshiped Yehovah. And he said, “Blessed be Yehovah Elohim of my master Abraham, who has not forsaken His mercy and His truth toward my master. As for me, being on the way, Yehovah led me to the house of my master’s brethren.” (Gen 24:24-27)

Oh – I want a woman like Rebekah, several in fact!  😉 Eliezer had found the woman he was looking for before he had even finished praying. Amazing – Yehovah is so faithful! This story brings me to tears practically every time I read it. Especially when we discover that Rebekah is only 10 years old.

Yasher 24:38 And Eliezer related to them all his concerns, and that he was Abraham’s servant, and they greatly rejoiced at him.
39 And they all blessed Yehovah who brought this thing about, and they gave him Rebekah, the daughter of Bethuel, for a wife for Isaac.
40 And the young woman was of very comely appearance, she was a virgin, and Rebekah was ten years old in those days.

That night there was a feast for Eliezer and his men and the next morning they all left and returned to Abraham and Isaac. They had found a woman for Isaac who met all Abraham’s requirements.

Yasher 24:41 And Bethuel and Laban and his sons made a feast on that night, and Eliezer and his men came and ate and drank and rejoiced there on that night.
42 And Eliezer rose up in the morning, he and the men that were with him, and he called to the whole household of Bethuel, saying, Send me away that I may go to my master; and they rose up and sent away Rebekah and her nurse Deborah, the daughter of Uz [Rebekah’s cousin], and they gave her silver and gold, men servants and maid servants, and they blessed her.
43 And they sent Eliezer away with his men; and the servants took Rebekah, and he went and returned to his master to the land of Canaan.

So they sent away Rebekah their sister and her nurse, and Abraham’s servant and his men. And they blessed Rebekah and said to her: “Our sister, may you become the mother of thousands of ten thousands; and may your descendants possess the gates of those who hate them.” Then Rebekah and her maids arose, and they rode on the camels and followed the man. So the servant took Rebekah and departed. (Gen 24:59-61)

Here is the rest of my Sabbath teaching on this beautiful story from Genesis 24.

For more teachings like this one (beginning at Genesis 1), visit our Journey Through Torah page.

Please Contact Michael to help support his work in building Yehovah’s kingdom on the earth.

Providence Ministries is NOT incorporated with any kingdom of this world. Providence Ministries is an affiliate of the Director of Ecclesiastical Enterprises, a Washington State acknowledged corporation sole of the ecclesia on file with the Secretary of the State. This charitable ministry is not for profit and maintains its nontaxable status consistent with 26 USC 508(c)(1)(A) of the Internal Revenue Code with respect to 501 (c)(3) organizations special rules as a “mandatory exception.”