Few people have ever stopped to consider that Noah, Shem and Abram ( even Nimrod) were contemporaries. I certainly hadnâ€™t! But as I have taken the time to dig deeper into the scriptures many things are beginning to come to light. The book of Jasher has forced me to explore some very interesting trails and answered many of my questions.

Too often, because of my laziness, I have skipped â€œthe begetsâ€; and because of that I have stayed trapped in my ignorance. I say trapped because those that do not know history are doomed to repeat it and learning about the confrontations between Abram and Nimrod can help to preserve our lives in the future, both near and eternal.

Did Shem And Abram Know One Another?

Yasher reveals that not only did they know one another, but that Abram lived with Noah and Shem for 39 years.

In the six hundredth year of Noahâ€™s life, in the second month, the seventeenth day of the month, on that day all the fountains of the great deep were broken up, and the windows of heaven were opened. (Gen 7:11)

This is the sum of the years of Abrahamâ€™s life which he lived: one hundred and seventy-five years. (Gen 25:7)

Ha â€“ check that â€“ Abraham only lived to be 175, so Shem outlived Abraham by 35 years. So interesting â€“ that means that both Isaac and Jacob were taught by Shem, and Eber!

Noah, Shem And Abram, Even Nimrod, Were All Contemporaries 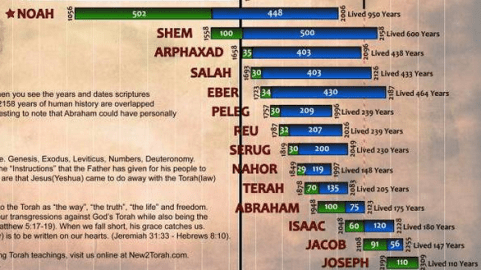 Here is the chart in a 10mb PDF format. Click the following link to view it or right-click and â€œSave file asâ€ to down-load it to your system. Age Chart

Did they know each other? Where else would Abram have learned Yehovahâ€™s statutes judgments, and ordinances? Does Israel’s Elohim (lawmaker and judge) ever change? Does His word endure forever?

Of all the people who were alive at the end of the antediluvian (pre-flood)Â world it was Noah who was chosen by Yehovah to repopulate the next world. Why? Because He walked with God/Elohim, his only lawmaker and judge!

Then Yehovah saw that the wickedness of man was great in the earth, and that every intent of the thoughts of his heart was only evil continually. (Gen 6:5)

This is the genealogy of Noah. Noah was a just man, perfect in his generations. Noah walked with Elohim. (Gen 6:9)

Shem And Abram Lived Together For 39 Years

And concerning Abram we read in Jasher chapter 9.

4 Haran [Abramâ€™s oldest brother] was forty-two years old when he begat Sarai, which was in the tenth year of the life of Abram; and in those days Abram and his mother and nurse went out from the cave, as the king and his subjects had forgotten the affair of Abram.
5 And when Abram came out from the cave, he went to Noah and his son Shem, and he remained with them to learn the instruction of theÂ Elohim and His ways, and no man knew where Abram was, and Abram served Noah and Shem his son for a long time.
6 Abram was in Noahâ€™s house thirty-nine years, and Abram knew Yehovah from three years old, and he went in the ways ofÂ Yehovah until the day of his death, as Noah and his son Shem had taught him; and all the sons of the earth in those days greatly transgressed against Yehovah, and they rebelled against him and they served other elohim (lawmakers and judges), and they forgotÂ Yehovah who had created them in the earth; and the inhabitants of the earth made unto themselves, at that time, every man his elohim;Â elohim of wood and stone which could neither speak, hear, nor deliver, and the sons of men served them and they became their elohim.

My next blog will contrast Noah, Shem and Abram with Nimrod, a man whose very name in Hebrew means â€œRebellion!â€ It is the spirit of Nimrod that is manifested in all of the governments of the Gentiles to this very day.

Here are some other reading you may be interested in.

Enoch And Methuselah
Enoch, Methuselah and Michael Didier all asked the same question, “Where is the man who delights to know the ways of Yehovah his lawmaker and judge?”

Noah: A Wholly Righteous Man
Noah was a wholly righteous man (eesh) who walked with THE Elohim of all the earth; while ha-a-dam’s seed (also men) perverted HIS WAYS in all they did.

Life Of Abraham / Abram Timeline
The Life of Abraham covers a span of 175 years. Below is a timeline which I put together based on my research in both Torah and Yasher.